Anthony Horowitz with Jeff Kinney - A Line to Kill 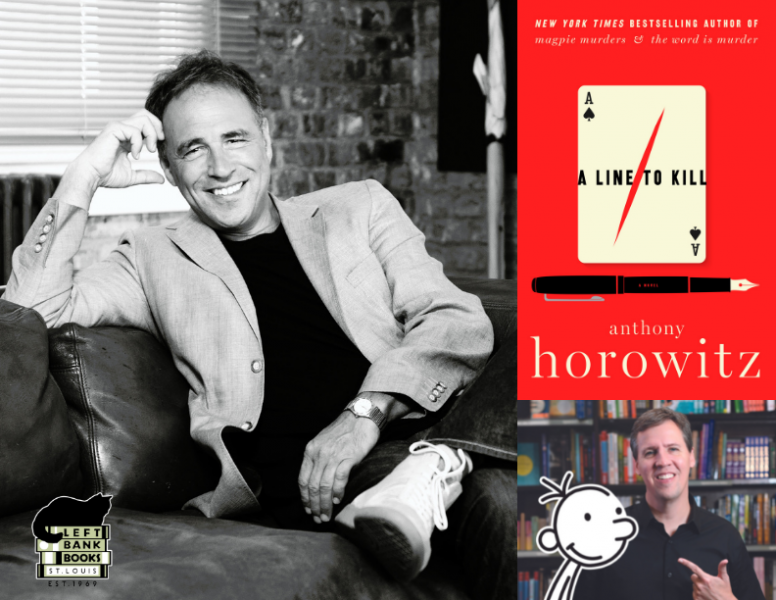 Left Bank Books and HarperCollins welcome bestselling author of the Hawthorne and Horowitz Mystery series
Anthony Horowitz,
who will discuss his new book
A Line to Kill,
on October 21st at 4pm CT / 5pm ET in a private online event.
Horowitz will be in conversation with author and independent bookstore owner,
Jeff Kinney.
This is an exclusive event that requires purchase of a SIGNED copy of
A Line to Kill
from Left Bank Books for admission.
About A Line to Kill

The New York Times bestselling author of the brilliantly inventive The Word Is Murder and The Sentence Is Death returns with his third literary whodunit featuring intrepid detectives Hawthorne and Horowitz.

When Ex-Detective Inspector Daniel Hawthorne and his sidekick, author Anthony Horowitz, are invited to an exclusive literary festival on Alderney, an idyllic island off the south coast of England, they don't expect to find themselves in the middle of murder investigation--or to be trapped with a cold-blooded killer in a remote place with a murky, haunted past.

Arriving on Alderney, Hawthorne and Horowitz soon meet the festival's other guests--an eccentric gathering that includes a bestselling children's author, a French poet, a TV chef turned cookbook author, a blind psychic, and a war historian--along with a group of ornery locals embroiled in an escalating feud over a disruptive power line.

When a local grandee is found dead under mysterious circumstances, Hawthorne and Horowitz become embroiled in the case. The island is locked down, no one is allowed on or off, and it soon becomes horribly clear that a murderer lurks in their midst. But who?

Both a brilliant satire on the world of books and writers and an immensely enjoyable locked-room mystery, A Line to Kill is a triumph--a riddle of a story full of brilliant misdirection, beautifully set-out clues, and diabolically clever denouements.

“One of the most entertaining mysteries of the year.” -Wall Street Journal on The Word Is Murder

“Irresistible. . . . What can’t this supremely versatile writer do?” -USA Today on The Word Is Murder

“Horowitz mimics Golden Age authors (Christie, Allingham, Marsh, Sayers) so well in his books' scope and denouéments that fans of both puzzle and cozy mysteries will savor the balance of clues.” -NPR on The Sentence Is Death

One of the UK’s most prolific and successful writers, Anthony Horowitz may have committed more (fictional) murders than any other living author. Two of his previous novels, Magpie Murders and Moonflower Murders, were instant NYT bestsellers. His novel Trigger Mortis (2015) contained original material from Ian Fleming. His most recent Sherlock Holmes novel, Moriarty, is already an industry sensation; its predecessor, The House of Silk, has sold over 450,000 copies worldwide in more than 35 countries. His bestselling Alex Rider series for Young Adults has sold more than 19 million copies worldwide. As a TV screenwriter he created both Midsomer Murders and the BAFTA-winning Foyle’s War on PBS; other TV work includes Poirot and the widely acclaimed mini-series Collision and Injustice. Anthony regularly contributes to a wide variety of national newspapers and magazines, and in January 2014 was awarded an OBE for his services to literature. He lives in London.

Jeff Kinney is a #1 New York Times bestselling author of the Diary of a Wimpy Kid series and the Awesome Friendly Kid series. He is a six-time Nickelodeon Kids' Choice Award winner for Favorite Book and has been named one of Time magazine's 100 Most Influential People in the World. He spent his childhood in the Washington, D.C., area and moved to New England, where he and his wife own a bookstore named An Unlikely Story.

You may purchase a SIGNED copy (bookplate) of A Line to Kill from Left Bank Books online or by phone. You must provide an email address to be invited to the private online event. If you have purchased the book from Left Bank, you will receive an email event reminder a few days prior to the event. You will receive the email with the link to join the private online event the DAY OF the event.

A Line to Kill: A Novel (A Hawthorne and Horowitz Mystery) (Hardcover)

The Sentence Is Death: A Novel (A Hawthorne and Horowitz Mystery #2) (Paperback)

The Word Is Murder: A Novel (A Hawthorne and Horowitz Mystery #1) (Paperback)

A Line to Kill: A Novel (A Hawthorne and Horowitz Mystery) (Large Print / Paperback)