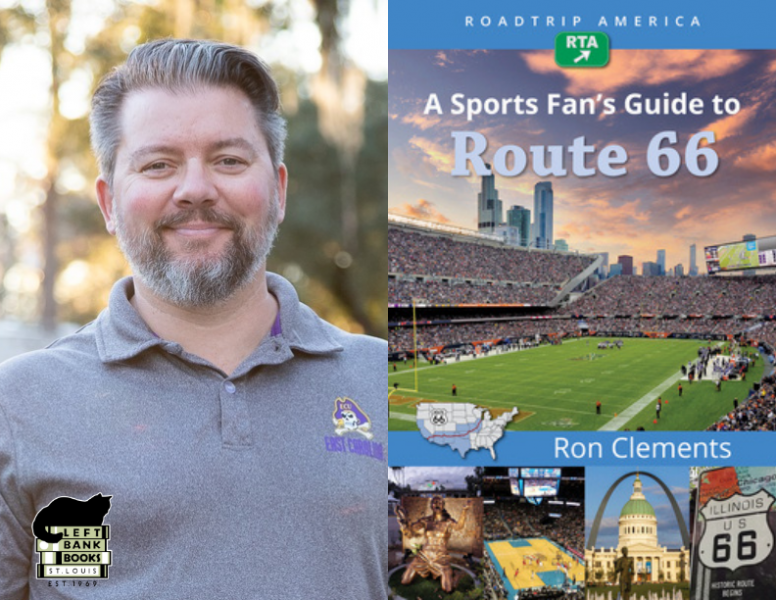 Left Bank Books welcomes sport's fan & author
Ron Clements,
who will discuss his new book
Roadtrip America a Sports Fan's Guide to Route 66,
in person at Left Bank Books on October 29th at 6pm Central.
Clements will sign books and chat with fellow sport's fans.
Please RSVP here and order a copy of
Roadtrip America a Sports Fan's Guide to Route 66
from Left Bank Books to support authors and independent bookstores!
Books will also be available for sale at the event. Ron will be signing copies during the meet and greet event.
If you are unable to make it to the in person event,
personalized copies are available to order through Left Bank Books online or over the phone.
MASKS and PROOF OF VACCINATION will be required to attend this event.

About Roadtrip America a Sports Fan's Guide to Route 66

Get Your Balls, Bats, and Sticks on Route 66!

Immortalized in countless books, songs, and movies, Route 66 is a timeless icon of American culture. Until now, however, no guide to this historic byway has focused on another beloved part of American culture: sports. That all changes with RoadTrip America A Sports Fan's Guide to Route 66. In this groundbreaking new book, sports writer and lifelong sports fan Ron Clements goes beyond nostalgic buildings and classic cars to highlight historic sports venues, storied sports professionals, and current sports events along the Mother Road.

Rolling west from Chicago to Santa Monica, the author shares inside information about the NFL, NBA, NHL, and MLB teams based in the cites and towns along Route 66. In addition, enjoy anecdotes gathered from auto and horse racing tracks, rodeo arenas, golf links, and the magnificent lineup of high school and collegiate sports programs to check out along the way.

The book has more than 300 photos and maps showing the various attractions in each of the eight states covered: Illinois, Missouri, Kansas, Oklahoma, Texas, New Mexico, Arizona, and California. And because no book about the Mother Road would be complete without it, there's plenty of info about the iconic roadside attractions that have entertained and enthralled travelers for the past century.

Rolling 301 miles through Illinois, Route 66 is dotted with small towns that embrace their Mother Road heritage. In addition to NFL, NBA, NHL, and MLB teams, you'll find auto and horse racing tracks and a magnificent lineup of high school and collegiate sports programs to check out along the way.

The Missouri stretch of Route 66 has a little bit of everything for sports fans. Professional teams, a pair of NCAA Division I universities, multiple D-II schools, elite high school teams, and a handful of golf courses are just the beginning.

A Sports Fan's Guide to Route 66 is a joyful who's who of where's where; a guidebook to seeing all the sports landmarks you'd never thought to see. It's pure fun." --Jeff Pearlman, New York Times, best-selling author of nine books including Boys Will Be Boys, The Sweetness, The Gunslinger, Love Me, Hate Me and The Bad Guys Won.
Best New Books of 2021: A delightful tribute to America's most prized byway. Color illustrations take you on one heck of a trip to sports venues, restaurants, and historic landmarks" --Men's Journal
The book is something to keep in the car for reference -- a personalized handbook that can deliver more than what you could find with even the best of Google searches." --Nickolaus Hines, Matador Network
The ultimate Road Trip book for sports. --Russ Cohen, Sportsology.com

Ron Clements is a Wisconsin native and Green Bay Packers fan who married a Chicago Bears fan from Peoria, Illinois. Despite the rivalry, Ron and Patti make it work and have been living fulltime in an RV since March, 2018. They travel the country in search of new adventures and love attending baseball games and exploring national parks. They visited all 30 MLB stadiums in 2018 and have taken their RV to each of the lower 48 states. Ron is a veteran journalist of more than two decades and a summa cum laude graduate of East Carolina University, which he attended following his service in the United States Marine Corps. Ron has written for USA Today, Sporting News, CBS Sports, the Pittsburgh Post-Gazette, Omaha World Herald, The Philadelphia Inquirer, The Fresno Bee, the Montgomery Advertiser, and many other media outlets. Ron and Patti have two adult sons, RJ and David, and a four-legged travel companion named Maverick. While Ron's home base is in Florida, he is on the road in his RV twelve months a year.